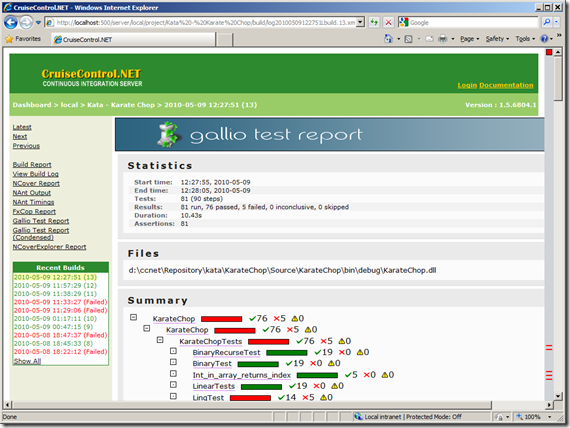 In a time, where test-driven-development (TDD) is becoming an established way to write a software you naturally write tons of (unit-)testing-code (that’s why it’s called test-driven).

OK, so you define some functionality, which should be exposed by a certain component. So you will most likely have a couple of public methods supporting this functionality. To make sure everything works as expected you write your usual testing-code.

So far so good. So imagine you have a couple of public methods exposing your predefined functionality, and a whole lot of other (private) methods doing some helper-stuff.

During the testing phase you will suddenly find out, some tests are failing. The good developer you are, you have messages associated with your asserts, so will have a clue on why something went wrong. But still, you will have to digg into your code to find, that some helper-methode is all over sudden screwing your whole component.

At this point in time you might want to write tests for those helper methods as well, just to make sure these helpers work expected – just like you do for your public methods. But wait, there is a problem! Usually your unit-tests will reside in a separate assembly, so you will not be able to call those private helper methods at all. But fortunatly there is help on the way … using reflection you can circumvent this problem.

Fortunatly MbUnit has already built in support, for testing such kind of methods using reflection.

Let’s assume you have a class called BusinessClass with a private helper methode DoSomething, which takes a string as a parameter, does some processing and returns some other string. So an appropriate test would be:

Unfortunatly Resharper only comes with support for NUnit. But since I’m currently deciding, that NUnit is the way to go, I also consider moving onto the next level: MbUnit.

So this niffty plugin for the plugin is just what I was looking for to get fully started with MbUnit.

One big bummer of unit-testing (especially with nunit) is, that you cannot test web-based code.

OK, so I kinda gave up on that one. But I recently developed quite some code, targeted to ease development of web-based apps. So this code is making use of the HttpContext in order to get to know something about who’s actually make the request etc.

So with regards to Phil Haacked I wrote a little method to inject a fake HttpContext and thus could at least write some unittest for my project.

But unfortunatly HttpContext.Current.User is returning null – so I might have to look a little bit around. I already figured, that Phil did an update on his original post – I’ll check that out!

Well, according to Scott Hanselmann MbUnit is supposed to be Unit Testing on Crack – I would prefer it to be on steroids (as I consider that to be more political correct, because I wouldn’t want to have a drug addict on my team :)) ). But anyway!

So I checked out MbUnit, and so far I think it has quite some neat features. After working for some years with NUnit I long for something new, which satisfies more complex requirements for unit-testing. Event though there are a couple of extensions to NUnit to enabled row-based testing, I consider MbUnit as an alternativ.

I will most definitely give it a try in one of my next projects.