At //build Microsoft showed the next version of Windows: Windows 8. Just after the public presentation, a developer preview is actually available for download.

So after downloading 4.8 GB you finally have a ISO image to install. Since I don’t have a spare laptop or desktop around I tried to give Windows 8 a “virutal” spin.

So I though – what the heck, why not give this VirtualBox a turn? A lot of people seem to work with VirtualBox, so it must be worth the effort of taking a closer look. OK, downloaded the bits and installed it on my Windows 7 host.

So let’s see how I can install Windows 8 on VirtualBox. Just create a new virtual machine, specifying it as Windows 7 64-bit and off you go. Just a short while later I’m greeted with the new Windows 8 metro design – this is smooth. Works just like a charm I must say. Should I re-consider my virtual hosting strategy?

Well, anyway. It’s about time to get a first impression of Windows 8 … so some further impressions will follow.

Who has not encounterd this problem: you’re just doing some debugging on your favorite SharePoint application and all over sudden – bam! The application pool gets recycled.

In order to circumvent this problem you have to disable the pinging of application pools by IIS. Just open up the advanced settings of the IIS application pool and set pinging to false. 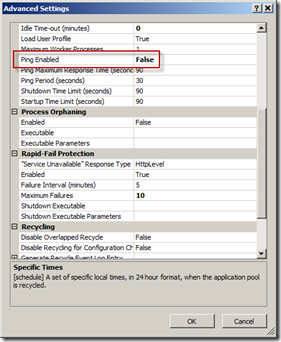